Are you joining us in Edinburgh to mark the anniversary of Robert Burns’ birth on 25 January?

Burns Night is a wild annual tradition in Scotland.

Up and down the country there shall be gallons of Irn Bru, Drams o’ Whisky & Haggis, enjoyed by all.

Why do we hold a Burns Supper?

The tradition of a Burns supper originates back to 1801 where 9 of Robert Burns closest pals held a supper in his honour, marking 5 years of his death. During the supper they enjoyed a tasty dinner of haggis and read renditions of some of his best work. The night was such a resounding success they decided to hold the supper as an annual gathering, thus beginning the tradition we still enjoy to this day.

Why should you take part?

Visit Scotland have kindly created a fantastic Scottish Spotify playlist, full to the brim of Scottish classics & amazing bands.  Listen to it here while you work your way through our suggestions.

What’s on in Edinburgh for Burns Night?

See details & get your tickets here.

Immerse yourself in a celebration fit for Rabbie himself. Choose between joining friends for an informal 3 course burns meal in jovial Ghillie Dhu’s main bar or enjoy live traditional Scottish music during a delicious dinner. Then top it off with a reeling ceilidh where you can learn and perfect all the best Scotch social dances throughout the night.

Steep yourself in rich Scottish culture and traditions at the Burns & Beyond Festival. Highlights include a family friendly ceilidh with the undisputed ‘king of the ceilidh’ Fergie Macdonald and a rich night of comedy and live music at the ‘Not So Traditional’ Burns Supper.

Get your tickets for the show here.

Perhaps you fancy a spot of theatre this burns day. The Scottish Story Telling Centre presents a Fringe-favourite, ‘Burns from Brunch’. Enjoy the company of Robert Burns as he wakes up in 2019 to share his poetry, songs and thoughts of a contemporary Scotland. This show is suitable for ages 14+ and is sure to brew some laughs.

Book your place for the supper here.

Too excited to wait?

If you’re looking for something to fill the void while you wait for Burns Night, we’ve got you covered, find plenty suggestions of things to do on our social media & printed in your apartment!

Whatever you get up to this Burns Night, lets raise o’ dram for Rabbie!

If you have any questions do not hesitate to email or call, we would be happy to discuss suggestions and things to do with you.

Edinburgh is very proud to be the world’s leading city of festivals.

This is great news for you, as a guest to the city, you can enjoy culture and festivities all year round. Read on to find out how to make the most of your visit.

Last year across our annual calendar of festivals we had a whopping 3,000+ events, 25,000+ performers, 4.5 million global attendees visiting from 70 countries. There’s never a dull day!

Start your year with a BANG at Edinburgh’s Hogmanay:

(30th of December to the 1st of January)

Hogmanay is a celebration loved and celebrated wildly. The traditions come from far and wide and range from Street Parties, Torchlight Processions, Live music and Ceilidhs. Each of the traditions are designed to wave goodbye to one year and start a new one fresh faced, on the right foot (and most likely hungover).

Top up your dopamine levels at the Edinburgh Science Festival:

Taking place at museums, galleries and public spaces, the Science Festival offers an exciting array of activities and exhibitions on all things science. Much of the festivals programming caters for all ages of fascinated minds. This festival is rich with experiences which vary from being hands-on and interactive to discussions which broaden outlook and spark debate.

Unlock your inner child at the International Children’s Festival:

This festival is annually-anticipated by locals and is made up of world-class theatre, specially selected for families to enjoy. The  International Children’s Festival programme is vibrant, energic, and a great way for children to stretch their imagination.

Appreciate the silver screen at the International Film Festival:

Starting in 1947, the film festival is the world’s longest running film festival. Fuelled by passion for all things cinema the festival is world-renowned for discovering new talent and heralding changes in the cinema scene.  The festival often draws in big names from on screen and behind the camera alike. 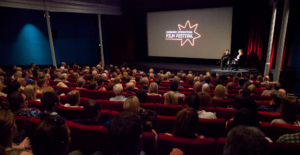 Keep it Jazzy at the Jazz & Blues Festival:

This festival offers a fantastic opportunity for music-lovers to enjoy all things jazz and blues. The diversity of this music scene is shown and celebrated throughout a variety of venues which host both local and established musicians. The festival also features a colourful New Orleans Mardi Gras, this open-air event draws in large crowds gathered in unison to watch the parade.

Have an art attack at Edinburgh’s Art Festival:

This festival celebrates art in all its forms and flavours. With 50 Exhibitions around the city displaying the works of over 300 artists this event represents the very best of visual art. If the idea of discovering the newest talent side-by-side alongside some of the most prominent works of known artists, then this is one for you.

Take a leap off the world’s greatest platform for creative freedom at the Edinburgh Festival Fringe:

Diversity. Creative Freedom. Inclusivity. Three fundamental philosophies that are echoed throughout the Fringe Fest. It’s fair to say that the fringe offers something for everyone and plenty that can be enjoyed by all. Our capital boasts the title and reputation as the Worlds biggest celebration of the arts and thousands of performers flock to the city to put on a show. The Fringe offers a wave of dance, comedy, theatre, events, opera, music and thought-provoking poetry. The city is never more alive than it is when the Fringe madness kicks in. 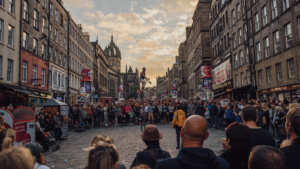 Be a citizen of the world at the International Festival:

This is the festival which originally founded the annual calendar of festivals which Edinburgh celebrates. Come to the International Festival to experience the height of artistic expression.

Enrich yourself in Scottish Culture and Pride at the Royal Military Tattoo:

An unmissable world showcase of military performances, which has strong Scottish roots. It is no surprise that the event has been running for 7 Decades as the Royal Edinburgh Military Tattoo, as audiences gather in their thousands to Edinburgh Castle to celebrate global traditions, pride, unity and belonging.

Book yourself off from work to attend the International Book Festival:

If you relish a good book then you’ll want to attend the largest public celebration of the written word, right? Every August Edinburgh welcomes a 1000 writers to gather with their audiences over a common love of books and stories. This festival is well suited for all ages and welcomes families.

Be immersed in the narrative at the Scottish International Story Telling Festival:

This festival was originally inspired by a traditional Scottish ceilidh and how it can bring a sense of unity amongst a crowd of strangers. Now in the present day the festival brings a mixture of Scots and their international counterparts to celebrate the diversity of story telling, in all its mediums. All events seek to engage the audience in in the magic of live story telling and transport the audience between worlds using the art of spoken word.

(16th of November to the 4th of January)

Enjoy the festive festivities at the Christmas Market in Edinburgh. Each year Edinburgh pulls out all the stops to create a winter wonderland of ice skating, streets filled with bright lights, street food, amusements and (my personal favourite) mulled wine. 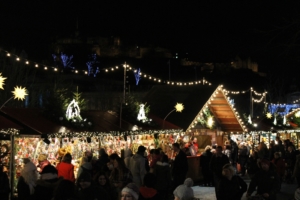 Whatever you get up to in #Edinburgh during your stay in our apartments, make sure to have a fantastic time and don’t forget to tag us in your pictures on Facebook and Instagram.

Furthermore, if you would like any further information on any of the festivals, we have attached a link to each heading.

A year after experts warned The Edinburgh Festival was slipping out of the “Festival Premier League”, organisers have received an extra half a million pounds of funding. This comes as great news to both big and small businesses throughout the city who often rely upon the festival as a major source of income.

The new head of The Edinburgh Festival, Julia Amour, is also looking to change the ethos of event. She is keen to incorporate funding from local businesses and create a volunteer programme which is similar to the one used at the 2014 Glasgow Commonwealth Games.

After scrutiny in recent times, things are definitely looking better for the Festival. Please click on the photo above to read more on the

Why not check out the

. Located only a a few metres from the Castle Esplanade, this is definitely one of Edinburgh’s most underrated tourist attraction. Lots of visual trickery + a great view of Edinburgh from the top!

If you are looking for a weekend break – we have availability throughout November and December. Book direct and receive best price guaranteed and free gift on arrival!

Throughout the Festive Period, The Royal Mile in Edinburgh will be transformed into a spectacular light show that will utilise 60,000 lights.

The show which will run from the 30th November – 24th December is sponsored by Virgin Money and Scotland’s Winter Festivals. The event will show twice daily at 6.30pm and 8.30pm. For more information click on this link Royal Mile Light Show

Coming to Edinburgh but not sure what to do? I’d recommend you check out this article: https://ow.ly/RgUXf . Washing your face with the dew from Arthur’s Seat is a must!

Looking for a quick weekend away in Edinburgh? Love food?

If you’re staying at our apartments already over this weekend why not check out this great event here. Just a short walk from our Southside Apartments.